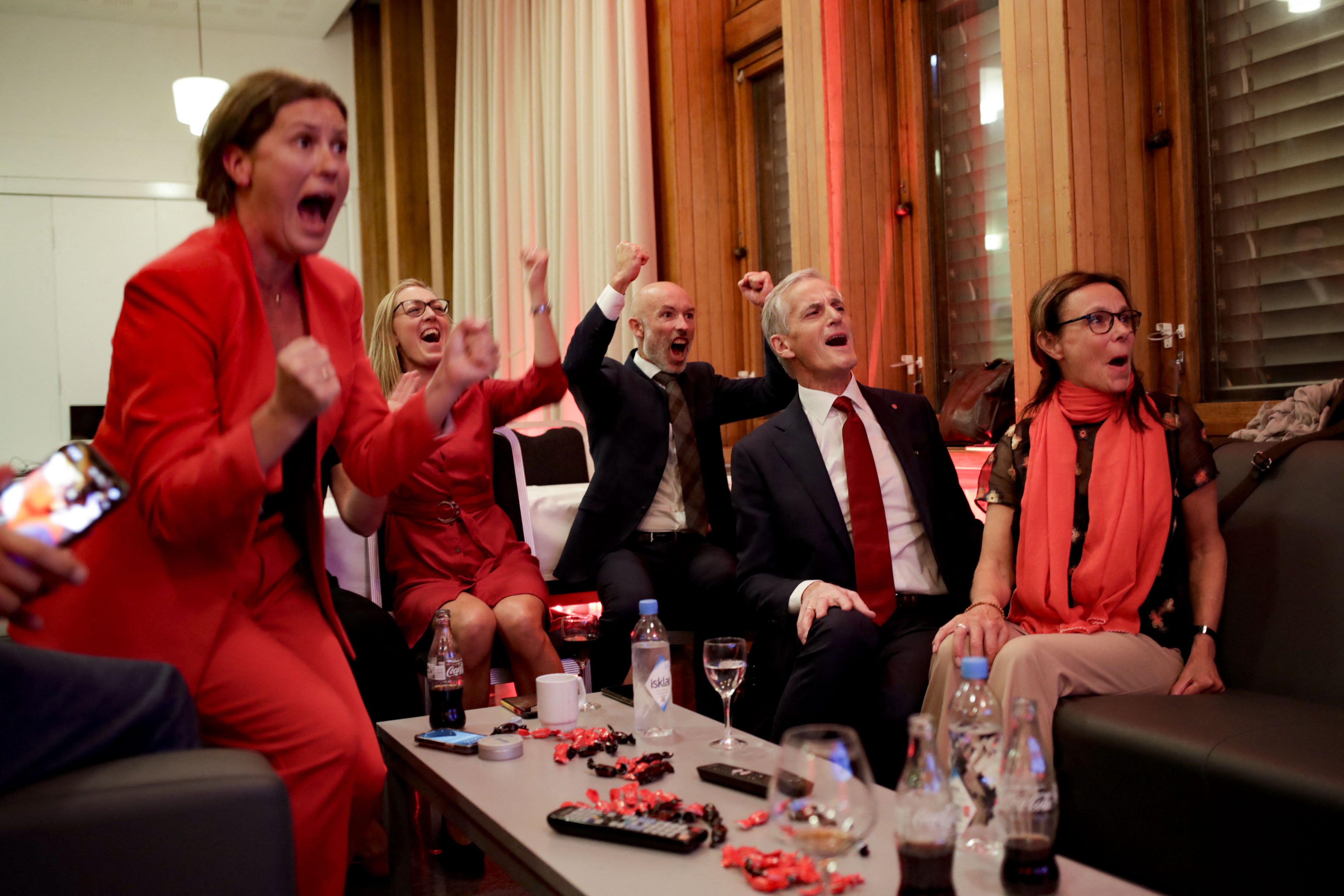 OSLO — Norway’s center-left opposition parties are on course to win a majority in parliament after Monday’s election and will now negotiate how to form a coalition, with climate change and a widening wealth gap expected to be central to discussions.

Conservative Prime Minister Erna Solberg conceded the election and will step down after eight years in power, while Labour Party leader Jonas Gahr Stoere said he intends to form the next government.

Download the NBC News app for breaking news and politics

Norway’s status as a major oil and gas producer has been at the heart of the campaign, although a transition away from petroleum — and the jobs it creates — is likely to be a gradual one despite progress by pro-environment parties.

To form a viable Cabinet, Stoere must persuade potential center-left partners to compromise on policies ranging from oil and private ownership to Norway’s relations with the European Union.

“We, as the biggest party, will make sure that Norway will get a new government and a new course,” Stoere said in a speech to party members.

“In the coming days, I will invite the leaders of all parties who want a change,” he said, adding he would start with the Centre Party and Socialist Left.

Norway’s crown currency was largely unchanged, trading at 10.20 against the euro.

“There will be some tax increases for example and there will be a different set of priorities … but the total size of the public budget will not be substantially different from if the current government would remain in place,” said DNB Markets Chief Economist Kjersti Haugland.

With 97.5 percent of the votes counted, Labour and four other center-left parties could swing to a combined majority of 100 seats, up from 81 currently, the Directorate of Elections projected.

A minimum of 85 seats is required to win a majority in the 169-seat parliament.

If the projections prove correct, Stoere could form a majority consisting of Labour, the Centre Party and the Socialist Left, which are on track for a combined 89 seats, and avoid having to work with the Marxist Red Party or the anti-oil Greens.

Getting the rural-based Centre Party and the mostly urban Socialists to govern together could be difficult, however, as the two take different views on issues from oil to taxes.

Ruling in a minority could also be an option for Labour. Stoere says his government would focus on cutting CO2 emissions in line with the 2015 Paris Agreement, but has rejected any ultimatum over energy policy.

Stoere has pledged to address inequality by cutting taxes for low- and middle-income families and hiking rates for the rich.

This website uses cookies to improve your experience while you navigate through the website. Out of these, the cookies that are categorized as necessary are stored on your browser as they are essential for the working of basic functionalities of the website. We also use third-party cookies that help us analyze and understand how you use this website. These cookies will be stored in your browser only with your consent. You also have the option to opt-out of these cookies. But opting out of some of these cookies may affect your browsing experience.
Necessary Always Enabled
Necessary cookies are absolutely essential for the website to function properly. These cookies ensure basic functionalities and security features of the website, anonymously.
Functional
Functional cookies help to perform certain functionalities like sharing the content of the website on social media platforms, collect feedbacks, and other third-party features.
Performance
Performance cookies are used to understand and analyze the key performance indexes of the website which helps in delivering a better user experience for the visitors.
Analytics
Analytical cookies are used to understand how visitors interact with the website. These cookies help provide information on metrics the number of visitors, bounce rate, traffic source, etc.
Advertisement
Advertisement cookies are used to provide visitors with relevant ads and marketing campaigns. These cookies track visitors across websites and collect information to provide customized ads.
Others
Other uncategorized cookies are those that are being analyzed and have not been classified into a category as yet.
SAVE & ACCEPT
Social Media Auto Publish Powered By : XYZScripts.com